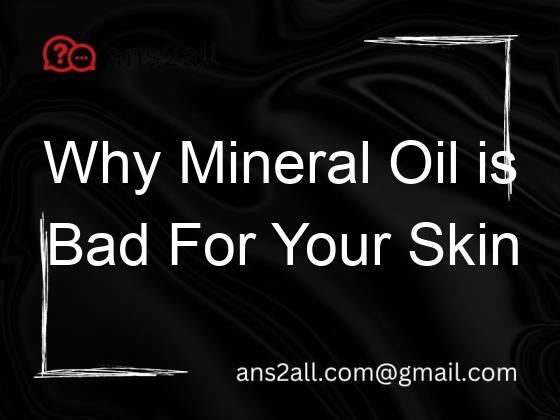 Mineral oil is an emollient ingredient that works well with other ingredients to moisturize the skin. This is good for those who have dry or sensitive skin and is also helpful in cases of psoriasis and eczema. Although there are risks of allergic reactions associated with mineral oil, these are small. The best way to use mineral oil is to apply it once or twice a day to the skin. The amount needed varies depending on the type of product you use.

Although there is no definite evidence linking untreated or mildly-treated mineral oils with cancer, there are a few known risks associated with these oils. The International Agency for Research on Cancer (IARC) has published its Mineral Oils Monographs on the topic. Other sources of information on mineral oils include the National Institute of Environmental Health and Safety’s Oil Mist Pocket Guide to Chemical Hazards and the National Institute of Occupational Safety and Health’s Mineral Oils Report on Carcinogens.

One study examined six mineral-oil samples. The samples were extracted with dimethyl sulfoxide and were then tested for their mutagenic activity using Salmonella typhimurium strain TA98. Five samples were found to be mutagenic, while one sample was non-mutagenic. The researchers found a significant correlation between mutagenic activity and the concentration of three to seven-ring polycyclic aromatic hydrocarbons in these oils.

Untreated or mildly-treated mineral oils may cause cancer, especially in animals. Several studies have demonstrated this. The modified Ames test (MAST) is the industry-standard method for mutagenicity tests. This test has recently been revised to include residual aromatic extracts and a lower cut-off value. While this method is still not a screen for cancer, it can accurately predict the mutagenicity of other petroleum categories.

Another method used to determine whether mineral oils are mutagenic is to perform an IP346 test using a DMSO extract. The IP346 test is an indirect method, and a DMSO extraction concentrates three to seven PAC. An IP346 test also identifies the chemical composition of crude oil.

The MOAH molecules found in mineral oils are different from those found in paraffin waxes. In most cases, they contain iso and cycloalkanes. However, in rare cases, mineral oils can also contain aromatics, which can cause a hazard. If the PAC content of a mineral oil is below the CLP note L threshold, the oil passes the carcinogenicity regulatory test.

The IARC has evaluated mineral oils twice before. Since then, new data have become available. These new data were incorporated into this evaluation. Although it has been long suspected that untreated or mildly-treated mineral oils are carcinogenic, the recent evaluation is the most comprehensive to date.

Carcinogenicity is dependent on the type of mineral oil and the refining process. In the past, untreated mineral oil was contaminated with high levels of polycyclic aromatic hydrocarbons (PAHs). But over the years, production processes have changed considerably. Initially, mineral oil was mildly refined and contained significant levels of PAHs. This acid treatment improved the technical properties of finished oils. But later, acid treatment was abandoned in favor of solvent extraction and hydro-treatment.

Potential for bioaccumulation of mineral oil in the body

The potential for bioaccumulation of mineral oil in the human body has been studied in a number of studies. One such review examined 281 articles, 80 of which used mineral oil as a placebo. However, the research was limited due to its limited power to detect small changes in biomarkers. In addition, many studies did not assess the effects of mineral oil on cardiovascular risk factors.

Mineral oil is an important component of our skin and has a number of beneficial effects. It helps prevent water loss by creating a thin film on the surface of the skin, and acts as a barrier against bacteria and allergens. This protective barrier is essential to our health. As we age, our skin produces less natural oil, so mineral oil helps compensate for this decrease. It’s important to maintain skin barrier health to prevent eczema, dermatitis, and psoriasis.

Mineral oil is a complex blend of aromatic and saturated hydrocarbons. Its composition differs depending on its refinement. However, the European Food Safety Authority (EFSA) has found that mineral oil intake is a potential health risk. In the Netherlands, the National Institute of Public Health and the Environment has found that mineral oil intake may be a cause for concern, but has recommended focusing on less common aromatic hydrocarbons as a safer alternative.

If you are considering taking mineral oil, there are several possible side effects you should know. This oil is often used in cooking, but it can also have serious side effects when used internally. It may reduce absorption of certain vitamins and may cause diarrhea. Also, it may thicken the blood, which could cause problems for some people. It is best to consult a doctor before taking it for any reason.

Mineral oil has been used for many years to help people relieve constipation. This is because it acts as a laxative, coating the intestines and stool with a waterproof film that allows it to pass. It can be taken orally or used as an enema, and is typically mixed with water. This type of oil can also help treat hemorrhoids and internal tears.

When taken orally, mineral oil is an odorless liquid derived from higher alkanes. It is often referred to as “baby oil” or “white oil.” Children are often recommended to take less than 15 milliliters of mineral oil per day. Although this amount may seem low, it is equivalent to about one to three tablespoons of most laxative products.

People with severe allergies to mineral oil should avoid it. They should also avoid using it near babies and children. It is best to check the ingredient label to be safe. Some of the most common allergic reactions include hives, skin rash, and itching. A more serious reaction may result in difficulty breathing, which requires immediate medical attention. A persistent cough can also be a sign that you are allergic to mineral oil. It can also cause inflammation of the lungs.

Another possible side effect of mineral oil is a bowel obstruction. Although mineral oil is a laxative, it is important to not overdo it. If you are not careful, you may not be able to pass bowel movements without mineral oil. Therefore, you should follow your doctor’s advice.

Mineral oil may interfere with other medications, so it is important to consult your doctor before using it. It is also best to take it at least two hours before you plan to eat a meal, as it may interfere with the digestion process and absorption of nutrients. In addition to these possible side effects, mineral oil should not be taken during pregnancy or while breastfeeding.

Mineral oil is common in cosmetics and is used for dry skin. Some people also use it as a mild laxative. But while unrefined mineral oil is a carcinogen, the highly refined type is not suspected to be a carcinogen. It is also used to treat cradle cap, cracked feet, and mild eczema. It can even be used to remove earwa.

In paediatrics, mineral oil is commonly used to relieve constipation. Its efficacy in treating constipation is well documented in medical literature. While it does not appear to cause severe side effects, it can cause lipoid pneumonitis. It is an odorless liquid obtained from petroleum. Despite its unpleasant smell, mineral oil is considered safe for use in personal care products. 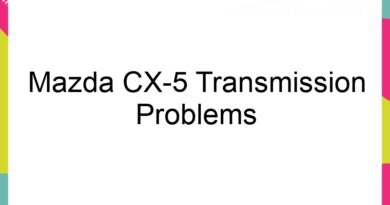 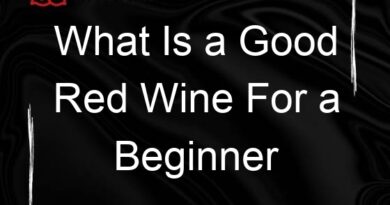 What Is a Good Red Wine For a Beginner 2?