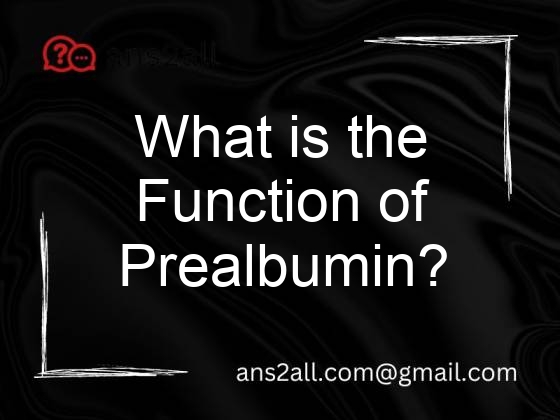 Prealbumin is a protein that transports retinol from the liver to target organs. It also functions as a marker of inflammation. Among other things, this protein is useful for predicting surgical outcomes. Its function in the body is important for many reasons.

Prealbumin transports retinol from the liver to target organs

Retinol is a naturally occurring nutrient that is present in the body’s cells. It is converted from carotenoids and retinyl esters by enterocytes into retinol and retinyl esters. Once converted, retinol undergoes a bioactivation process to create retinal, one of the body’s most important antioxidants.

Retinol transport is carried by a complex of proteins, retinol-binding protein (RBP) and transthyretin. RBP is a 21-kDa single polypeptide chain protein that binds retinol. It interacts with homotetrameric T(4) transport protein (TTR). The interaction between RBP and TTR prevents glomerular filtration of the low-molecular-mass RBP. The retinol-binding protein and T(4) transport protein are implicated in vitamin A homeostasis and disease.

Retinol is transported by prealbumin from the liver to target organs by retinol-binding proteins (RBP). Once the retinol reaches the target organs, the RBP releases retinol from its binding partner, the cellular retinol-binding protein (CRBP). Retinol dehydrogenase 10 oxidizes the retinol to retinaldehyde. In addition, the free retinol is oxidized by nonspecific alcohol dehydrogenases.

Retinol is transported from the liver to target organs by prealbumin and transthyretin. Retinol and RBP form a complex and are transported to the hepatic stellate cells where retinol is re-esterified. Then, RBP binds to transthyretin.

Transthyretin, also known as prealbumin, is a major blood transport protein. It migrates faster than albumin and is visible as a band anodic to the main albumin fraction on gels. Hamilton and Benson attributed this property to human prealbumin, but Kaneko reported that prealbumin does not appear on gels in some species. They changed the name from prealbumin to transthyretin in the 1980s because it also binds thyroid hormones and is a precursor of amyloid deposits.

The role of RBP in retinol transport in the body is important for many reasons. Retinol is a vital nutrient for the body and plays an important role in the function of many organs. When retinol is not properly absorbed from the liver, it can lead to deficiencies in the organs. Keeping the RBP-retinol ratio in the normal range is important for maintaining the body’s health.

It is a marker of inflammation

Prealbumin is a small protein that carries vitamin A and thyroid hormone, and is widely evaluated as a nutritional and prognostic marker. It is important to know the level of prealbumin in blood because it may indicate malnutrition or deteriorating health. Current research is focused on understanding the role of prealbumin in inflammatory processes and disease, the changes it undergoes during illness, and its clinical utility.

It is a good predictor of surgical outcome

Prealbumin, or preoperative albumin, is a useful marker of nutritional status that can predict surgical outcomes. Patients with low prealbumin levels have increased risks of infection, long hospital stays, and even death after major surgery. Preoperative albumin testing should be incorporated into preoperative education. More research is needed to determine whether nutritional supplementation can reduce the risks associated with low prealbumin levels.

To conduct this study, researchers examined the association between preoperative serum albumin level and operative mortality. Patients were followed for 30 days postoperatively. They used multiple logistic regression models to evaluate the preoperative serum albumin level as a predictor of mortality and morbidity after surgery. The study used data from 54,215 cases of major noncardiac surgery from the National VA Surgical Risk Study.

The researchers found that the level of preoperative serum albumin was a significant predictor of postoperative complications. Specifically, they looked at subgroups of patients and found that low prealbumin was associated with a higher risk of postoperative complications. The authors suggest that further study should be conducted to determine if prealbumin and LT are associated. 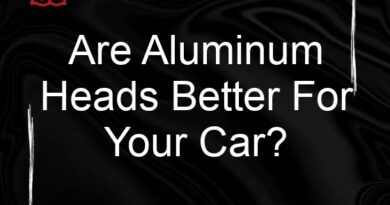 Are Aluminum Heads Better For Your Car?

Which Part of a Chicken is Healthiest 2?

The first thing you must know is that there is a huge difference between diamonds and cubic zirconias. Diamonds are